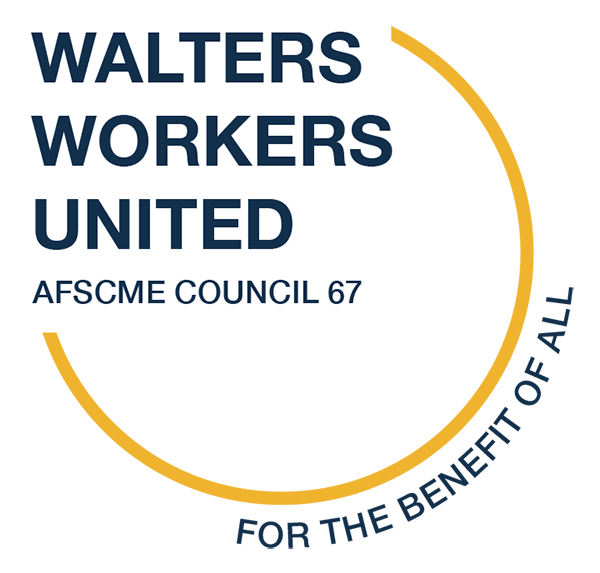 Employees at the Walters Art Museum in Baltimore are organizing under the name Walters Workers United, and they intend to join the American Federation of State, County and Municipal Employees Council 67, citing concerns over pay equity, the health and safety of employees, and “the museum’s top-down decision-making.”

At this time the Walters Workers United website states:

We announced our plans to unionize on April 30, 2021, and we have secured supermajority support for a union among our co-workers. Hundreds of community members have signed our support letter and we have even garnered the support of Baltimore Mayor Brandon Scott, Baltimore City Council members and the Baltimore City Comptroller. However, the Walters Art Museum still refuses to agree to a union election that would include our co-workers across all departments. Despite this impasse, we will continue to seek a fair path toward union recognition for our wall-to-wall union.

“Unions give workers the platform to unite and advocate for their own working conditions and deserve to be celebrated,” Mayor Brandon Scott  wrote in a letter to the museum’s board of trustees. “Ultimately, the right of workers to organize and form collective bargaining units is a fundamental component of our democracy and, as such, must be protected.”

Posted by PLG member at 6:50 PM No comments:

The regular meeting of the examination bodies and Libraries Trade Group Council has been described as a critical organ of the Non-Academic Staff Union of Educational and Associated Institutions in positioning the union in its quest to respond to emerging challenges.

The meeting was a veritable platform to discuss issues to enhance the growth and development of libraries and examination bodies in Nigeria to globally acceptable standards.

You read the article, that reports on this event:

Posted by PLG member at 6:26 AM No comments:

eliminating the librarian positions was still the best option.

Despite criticism from the Ellensburg (WA) community, teachers, and parents, the Ellensburg School District’s decision to cut the certified librarian positions from secondary education hasn’t changed.

Ellensburg Education Association (the ESD teachers’ union) co-presidents Megan Kratzer and Kevin Dwight said their talks with ESD don’t feel like a discussion, and instead they are simply being told what is happening and have no input.

“In other districts, teachers have been able to work more with the administration to come up with plans,” Kratzer said. “We haven’t had specific conversations. We have asked, as a teachers’ union, we asked to have a discussion about how we might better serve our students, but we haven’t gotten to those discussions.”

The EEA meets with the district once a month and on March 14, had a meeting specifically regarding the budget reductions. Kratzer said the union brought forward options that might be alternatives to cutting the librarians but never heard back from the district. Haberer later told the Daily Record the district did look at these options, but eliminating the librarian positions was still the best option.

Posted by PLG member at 8:03 PM No comments:

What Chicago Public Schools has done to school libraries is heartbreaking

2 Longtime CPS Librarians Fought Against Cuts For Years. Then They Were Fired:

Leslie Westerberg of Nixon Elementary and Nora Wiltse of Coonley Elementary are devastated their jobs were eliminated and worry their schools' libraries will sit empty next school year.

Nixon Elementary’s longtime librarian Leslie Westerberg has  spent years meeting with elected officials, writing essays for the Chicago Teachers Union and researching district budget cuts for her master’s degree outside of school hours — all in an effort to keep school libraries strong and librarians employed.

Across town, Nora Wiltse has taken a similar approach as Coonley Elementary’s librarian for 14 years, criticizing Chicago Public Schools in news stories and at news conferences for failing to invest in school libraries, particularly on the South and West sides. The American Library Association recognized Wiltse for her advocacy in 2020  with the  Futas  Catalyst for Change  Award

Posted by PLG member at 9:15 PM No comments:

Sunday, June 26, 4:00 p.m. - 5:00 p.m.
Washington Convention Center, 204C
Please make plans to attend the Progressive Librarians Guild Meeting at ALA Annual in Washington DC, where Daniel Clarkson Fisher, the 2022 winner of the Miriam Braverman Memorial Prize, will present his winning essay “A Promised (but Ultimately Unreachable) Land”.
Fisher’s essay presents a critical history of the concept of neutrality, which he categorizes as “functionally impracticable” despite being a “touchstone of contemporary librarianship.” As a case study, Fisher asserts that the selection of former President Obama as ALA’s 2021 keynote speaker is at odds with its organizational values.
Fisher is a graduate student at Western University, and his anticipated graduation date is June 2022.
PLG / Braverman Dinner
Sunday, June 26, 7:00 p.m. - 8:30 p.m.
Baan Siam, 425 I Street Northwest, Washington DC
PLG members and friends are cordially invited to attend the 2022 Progressive Librarians Guild / Miriam Braverman Prize Dinner in Washington DC. This year's Miriam Braverman Prize is given to Daniel Clarkson Fisher for his essay “A Promised (but Ultimately Unreachable) Land”.
Baan Siam is moderately priced and provides vegetarian options. Hope to see you there!
— Mark Hudson, PLG Coordinating Committee
Posted by PLG member at 5:20 PM No comments:

At the heart of workers’ power is the ability to shut down business as usual by using the best-known tool in the labor movement’s toolbox: the strike. Hear from workers who’ve done it themselves, from Nabisco to Kellogg’s to Starbucks, and how those fights have transformed their unions, their co-workers, and the world.

A UNION BREWS AT STARBUCKS

Starbucks workers across the country have been self-organizing an expansive and exciting new organizing campaign that has caught the national imagination. Hear from workers who’ve organized their own stores, gone on strike, built public support, and are changing the labor movement.

LABOR’S UPSURGE: HOW UNIONS CAN MAKE THE MOST OF THIS MOMENT

From Amazon and Starbucks to Google and Apple, we’re in the midst of a wave of union organizing that is challenging longstanding assumptions and redefining the boundaries of what’s possible. Join a discussion with veteran labor strategists and organizers on the frontlines of current organizing efforts about how unions can make the most of this upsurge.

Hear directly from rank-and-file Amazon workers from four different groups across the country about how they’re organizing at the corporate giant—building independent unions and winning elections, organizing direct actions on the job, and launching campaigns to improve working conditions and demand wage increases. 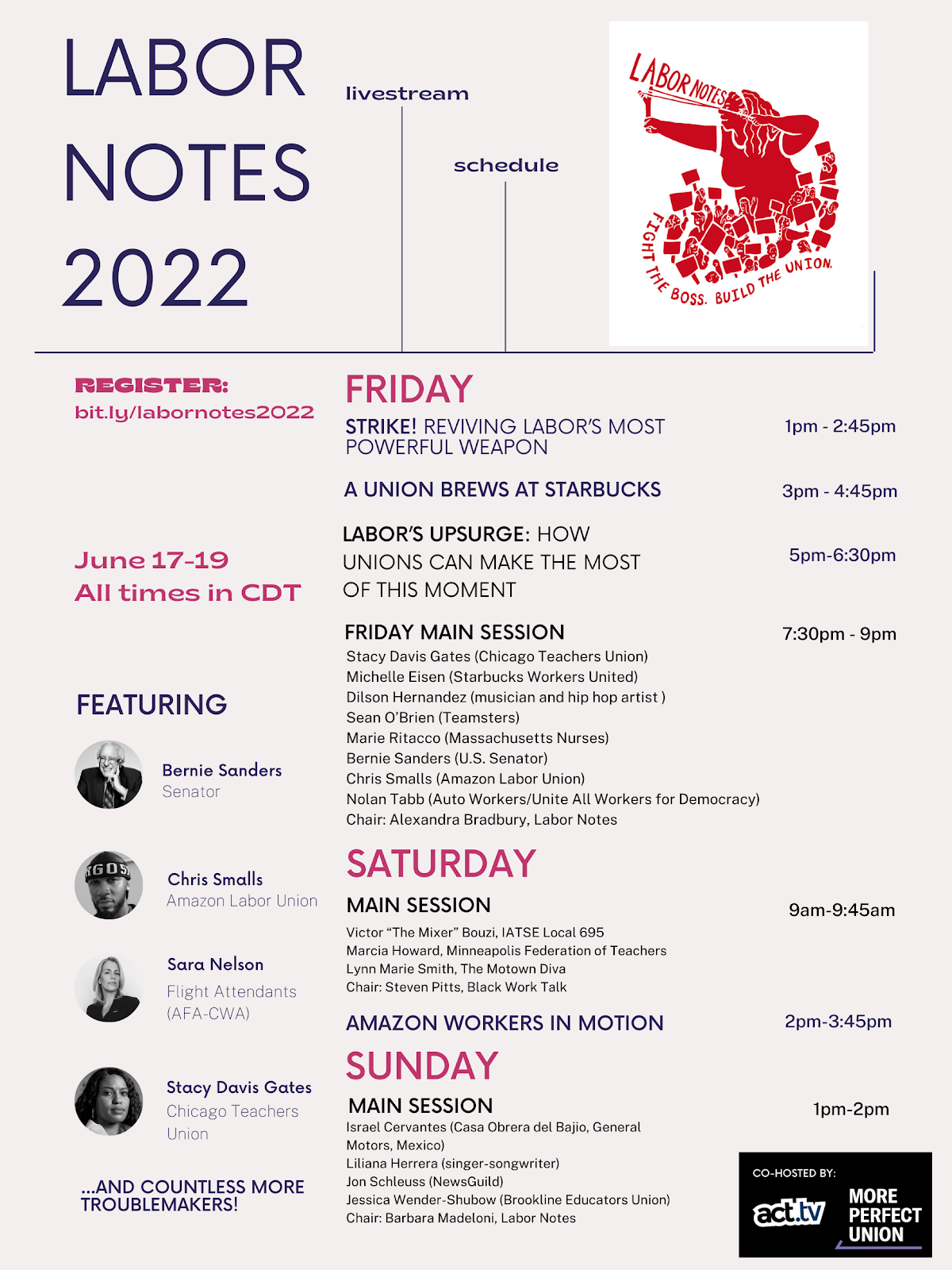 Posted by PLG member at 6:08 PM No comments:

Texas A&M librarians give up tenure status in academic reorganization

Administrators say the reorganization was designed to streamline and simplify library operations and emphasize student needs over librarians’ research, according to The Houston Chronicle.

Thanks to Library Link of the Day for this.

More at Inside Higher Education:

Posted by PLG member at 6:48 AM No comments: