UC-AFT, a union representing lecturers and librarians on the UC Davis campus, held a rally on Wednesday, Feb. 28. 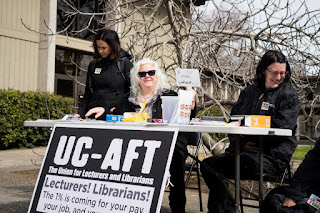 UC-AFT, a union representing lecturers and librarians on the UC Davis campus, held a rally on Wednesday, Feb. 28. Tabling in front of the Silo and Sproul Hall, union members were eager to talk to passersby about their concern regarding the Supreme Court case Janus v. AFSCME. In this case, Illinois public employee Mark Janus is arguing that his requirement to pay fair share fees to his union —  although he is not a member — is a violation of his free speech. Fair share fees are dues that workers who are not members of a union pay to the union that represents them. Arguments for this case were heard by the Supreme Court the Monday before the rally took place.
“This rally is called WeRise and what we’re doing is getting all of our union members together and aware of this Supreme Court case that is happening right now, which is called Janus v. AFSCME, which basically is being viewed as sort of an attack on all public unions around the country,” said Katie Rodger, a lecturer in the University Writing Program. “All of us could be affected by this Supreme Court case. Today is an information campaign and also a launch of what we are calling a recommitment effort, where we are going to ask our existing members to recommit to staying strong and part of our union.”
Posted by PLG member at 10:09 PM