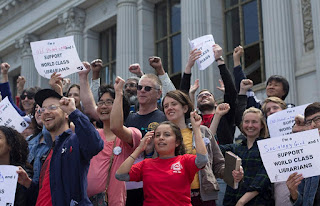 After more than 16 months of preparation and six months at the bargaining table, UC librarians are still in negotiations with the UC system. In a press release from Oct. 9, a union representing the librarians rejected the UC’s request to extend their current contract, which expired Oct. 1.
The University Council-American Federation of Teachers, or UC-AFT — the union representing the librarians — proposed changes to 20 out of 34 of the contract’s articles and proposed the addition of two articles. The UC has dismissed all of these proposals, according to the union’s press release.
UC spokesperson Danielle Smith said the university’s goal is to reach a long-term agreement with the UC-AFT, including competitive pay, health care and retirement benefits.
“UC remains committed to working diligently and in good faith with UC-AFT to reach an agreement as soon as possible,”  Smith said in an email.
The UC-AFT represents about 350 librarians from all 10 UC campuses, roughly 85 of whom work at UC Berkeley or UCSF, according to Kendra Levine, a librarian at the campus Institute of Transportation Studies and member of the union. UC-AFT’s demands include improved salary, academic freedom — referring to one’s freedom to pursue their own research — sabbatical leave and more.
“The only reason I can afford to be a librarian at Berkeley is because I have a partner who has a high-paying job, and he subsidizes me working at Berkeley,” Levine said.
In order to have diversity within the staff, the UC needs to pay sustainable wages, Levine said. Currently, librarians employed by the California State University system and California community colleges are paid higher salaries than UC librarians.
Smith said the UC system has presented several “favorable” proposals to UC librarians, including an enhanced wage structure.
The UC has proposed a wage structure whereby salaries go up by 3 percent, 2 percent, 2 percent and 2 percent over the next 4 years, according to the union’s website. UC-AFT, however, said these percent increases are below the annual inflation rate and do not address the disparity experienced by early-career librarians, according to their website. UC-AFT had proposed during bargaining that there be a $3,500 lump sum raise across the board for a three-year contract, Levine said.
Levine said academic freedom, another of the union’s demands, is also key to librarians’ work.
“It is important for us to be able to research and be critical and be part of that research ecosystem, so we asked for that to be written into our contract,” Levine said. “We’re not going to back down on this.”
The next scheduled bargaining meeting will take place Oct. 19 on campus.
John de los Angeles, a spokesperson for the American Federation of State, County and Municipal Employees, or AFSCME — the UC workers’ union — said that over the last several years, workers represented by AFSCME have had to strike for each contract round to get what they believe is a “fair” deal.
Bargaining has been scheduled through November, and the UC-AFT is trying to set up more meetings if possible.
“We will see how it goes,” Levine said. “I’m really hopeful.”